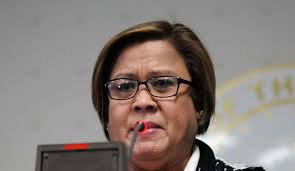 A financial investigator from the Anti-Money Laundering Council and a digital forensic examiner from the Philippine Drug Enforcement Agency reaffirmed on Friday that Senator Leila De Lima was not involved in any suspicious transaction that would link her to the illegal drug trade inside the New Bilibid Prison, De Lima’s lawyer Bonni Tacardon said.

In a statement, Tacardon said AMLC financial investigator Artemio Baculi Jr. and PDEA digital forensic examiner Krystal Caseñas both affirmed under oath that they found no suspicious transactions between the senator and drug convicts.

Earlier, Tacardon admitted that his investigation of individuals suspected to be involved in the Bilibid drug trade showed that no money flowed from the bank accounts that were the subject of his investigation to either De Lima or her co-accused Jose Adrian Dera.

Meanwhile, Caseñas affidavit indicating that the cellphones she received from the Bureau of Corrections were Co’s property was stricken off by the court as this was only her opinion.

Tacardon also pointed out that Caseñas might have violated the Cybercrime Law when she examined Co’s phones without a proper warrant.

“Kapag hindi ka kumuha ng cyber warrant, any evidence recovered will be excluded and may even result in the examiner facing criminal and administrative liabilities,” he added.

De Lima, who remains detained over drug charges, recently filed two separate and distinct motions for bail both for conspiracy to commit illegal drug trading cases, asserting that the prosecution’s evidence against her was not strong and confirmed her innocence of the charges.

Judge Liezel Aquiatan had yet to rule on both motions as of posting time. (GMA News)

This website uses cookies to improve your experience while you navigate through the website. Out of these, the cookies that are categorized as necessary are stored on your browser as they are essential for the working of basic functionalities of the website. We also use third-party cookies that help us analyze and understand how you use this website. These cookies will be stored in your browser only with your consent. You also have the option to opt-out of these cookies. But opting out of some of these cookies may affect your browsing experience.
Necessary Always Enabled

Any cookies that may not be particularly necessary for the website to function and is used specifically to collect user personal data via analytics, ads, other embedded contents are termed as non-necessary cookies. It is mandatory to procure user consent prior to running these cookies on your website.