Bienvenido R. Tantoco Sr. has passed away, a member of the family confirmed on the morning of July 6, 2021. The former ambassador to the Vatican, known to many simply as Lolo Benny, was 100 years old. Together with his [...]

Prince William and his wife Kate mark a decade of marriage on Thursday, with the popular couple increasingly seen as the British monarchy’s future as other senior royals age or recede from view. Second-in-line to the throne William, 38, and [...] 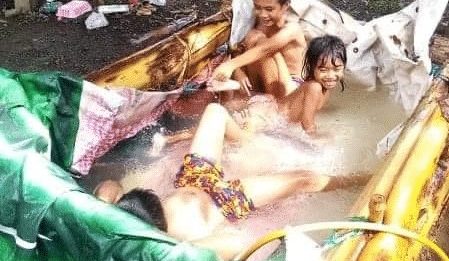 Poverty did not prevent a man from granting the request of his seven-year-old granddaughter of having a swimming pool in their place in Barangay Baybayog here. Lacking the resources to purchase the inflatable types, Edgar Guiyab Paet used his little [...]

What started out as a humble gesture along Maginhawa St., Quezon City became an epidemic of kindness that spread like wildfire in the country. Community pantry is among the ultimate symbols of bayanihan in our modern times, or in this [...]

To some, what is essential may be invisible to the eye. But not to this priest who served the famed Filipino rice porridge, or “lugaw”, during the reenactment of Last Supper on Maundy Thursday, April 1. Priests from the St. [...]

‘Virus hunters’ hope to stop the next pandemic

Researchers wearing headlamps and protective suits race to untangle the claws and wings of bats caught up in a big net after dark in the Philippine province of Laguna. The tiny animals are carefully placed in cloth bags to be [...]

I Was Retrenched At 26 And No Savings

I am a 26 year old female and was retrenched in November 2020. It was an immediate termination. I was then an office manager/executive assistant earning $3,800 a month. You think retrenchment only happens to people in their mid-40s and [...]

Don’t worry about the family that ignores

Don’t worry about the family that ignores and acts like you don’t matter. Love the ones who are always there for you, no matter what. [...]

Never leave your child alone with daddy, consequences will be the same like this

Here are the surprising photos of Boracay’s new look after 27 days of government’s rehabilitation and restoration program. Boracay has been the headlines of several local news outlets and social media pages for the past few months after the President [...]